The upper airway epithelium is an active cellular layer with ciliary movement to clear materials, the ability to secrete inflammatory effectors, and a biological barrier function that helps protect against pathogenic microorganisms, foreign insults and injury. Compromise of the upper airway epithelium and exposure of the underlying tissue has been associated with asthma, bronchitis, and chronic obstructive pulmonary distress syndrome as well as the increased susceptibility to pathogenic microorganisms, which can further exasperates airway diseases. Bordetella sp. are one of a variety of microbial pathogens that can overcome these defenses to infect human and animal species. Although much is known concerning the microbial genetics and microbial signaling of infection by Bordetella sp., relatively little is known about host cell pathology after exposure to Bordetella sp. We have a primary tissue culture system that serves as an in vitro model of airway cell signaling and communication, and a battery of B. bronchiseptica strains, some of which are mutant in key factors shown to inhibit their ability to establish infection in animal models. One focus of our research is to define specific pathogen factors that alter host cell physiology to initiate or overcome host cell defense. This focus includes the response of individual cells as well as multicellular defense through intercellular signaling.The epithelial layer that lines the alveoli of the distal mammalian lung is made up of two distinct cell types, alveolar type I (AT1) and alveolar type II (AT2) cells. Although these cells are found in roughly equal numbers, AT1 cells cover 95% of the epithelial surface area. Physiological functions for AT1 cells include the primary site of gas exchange and for AT2 cells include the productions of critical secretions that keep the lung from collapsing. Just as importantly, AT2 cells serve as “stem cells” that divide, migrate and differentiate to reform the AT1/AT2 epithelial layer following insult or injury. Dysfunction of alveolar epithelial cells, as seen after airway injury, can have serious effects on lung physiology, (e.g. reduced O2 transfer, altered liquid interface, or misplacement of cell types at the lung surface that further exasperate the disease). Unfortunately, little is known concerning the cellular mechanisms that allow for alveolar cells to work together for normal lung function. We have recently used variations of extracellular matrices to develop a tissue culture model that includes both AT1 and AT2 cells in a single culture for an extended period (7 - 10 days). These cells express competent junctional components (i.e., both tight junctions and gap junctions) between and among both cell phenotypes. We currently are using a variety of molecular and cellular techniques to define and refine this tissue culture model and to study intercellular communication that contributes to alveolar repair after injury and disease. We believe that this model system for alveolar intercellular communication could expedite the formulating and testing of new medical treatments for dysfunctional alveolar cell physiology that underlies specific airway conditions following disease, insult and injury in the lung.Selected publicationsOlsen CO. Isakson BE. Seedorf GJ. Lubman RL. Boitano S. Extracellular matrix-driven alveolar epithelial cell differentiation in vitro. Experimental Lung Research. 31(5):461-82, 2005.Edwards JA. Groathouse NA. Boitano S. Bordetella bronchiseptica adherence to cilia is mediated by multiple adhesin factors and blocked by surfactant protein A. Infection & Immunity. 73(6):3618-26, 2005.Boitano S. Safdar Z. Welsh DG. Bhattacharya J. Koval M. Cell-cell interactions in regulating lung function. American Journal of Physiology - Lung Cellular & Molecular Physiology. 287(3):L455-9, 2004.Groathouse NA. Heinzen RA. Boitano S. Functional BvgAS virulence control system in Bordetella bronchiseptica is necessary for induction of Ca2+ transients in ciliated tracheal epithelial cells. Infection & Immunity. 71(12):7208-10, 2003.Isakson BE. Seedorf GJ. Lubman RL. Evans WH. Boitano S. Cell-cell communication in heterocellular cultures of alveolar epithelial cells. American Journal of Respiratory Cell & Molecular Biology. 29(5):552-61, 2003.NIH High School Student Research ProgramYue Zong, University High School, 2006

Scott Boitano, PhD, and his lab focus on chronic obstructive pulmonary disease, or COPD. Lung disease is expanding worldwide, and is one of the top uncontrolled American epidemics. It leaves about 900,000 Americans too ill to work, costing billions in medical care and lost productivity. Most of the disease is linked to smoking and to environmental and occupational conditions. Dr. Boitano’s main focus is the affect of arsenic on the lung’s epithelial cells. The interactions between arsenic and the body’s tissues affect lives not just in Chile, Mexico, or Bangladesh – where arsenic in drinking water can reach very dangerous levels of up to 500 or even 1,000 ppb—but everywhere. Dr. Boitano is studying the long-term risks found in many American cities and towns where arsenic values are between 50 and 10 ppb, and where there are strong changes in how cells signal each other and repair wounds. 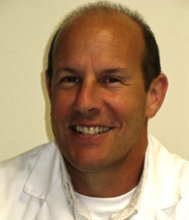