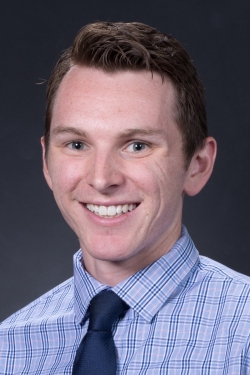 Every student at the College of Medicine – Phoenix designs and successfully completes a hypothesis-driven research Scholarly Project. Students work closely with mentors and the Scholarly Project office throughout the four years of their project. Through this process students learn about medical information literacy, life-long learning, teamwork, effective communication, research methods, evidence-based medicine approaches and ethics related to scholarly inquiry.

Evan Austin, a UA physiology graduate, is a third-year medical student at the UA College of Medicine – Phoenix. For his Scholarly Project, Evan is working with John Chang, MD, a radiologist at Banner MD Anderson Cancer Center. Together, they are investigating the clinical utility of PI-RADS scores, a structured reporting scheme for evaluating the prostate for prostate cancer, in predicting positive in-bore MRI guided targeted prostate biopsy results. Evan plans on submitting his project to the GU-ASCO conference in San Francisco in February 2020.

Evan was born in Las Cruces, New Mexico, but primarily grew up in Sierra Vista, Arizona. After receiving his bachelor’s degree in physiology, Evan took a gap year before medical school and worked in the UA Department of Urology as a scribe. In the department, he assisted with projects investigating outcomes related to vaginal mesh removal and helped write a case report.

Evan’s first exposure to research came during his undergraduate career working in the Department of Orthopedic Surgery with L. Daniel Latt, MD, PhD. During his time on Dr. Latt’s team, Evan helped with a project investigating how EMR implementation impacted clinical workflow. He noted that working with Dr. Latt helped him understand how one could have a successful career combining research with clinical duties as a physician.

Evan noted that his favorite project so far has been his most recent secondary project working alongside Donald Lamm, MD, a well-known urologist, who practices in Phoenix. Evan is working with Dr. Lamm with experimental intravesical treatments for bladder cancer. Evan described the experience so far as being eye-opening in terms of the amount of collaboration, time and money required to test new therapies.

When asked about his aspirations to pursue additional research opportunities in the future, Evan said “I really enjoy research and hope to someday incorporate it into my practice after completing medical school and residency. One of my favorite aspects of medicine is that it is always moving forward. It is never stagnant and requires one to frequently consider if there is a better way of doing things. I love how the learning never stops.”

Evan said he is currently open-minded when considering his future career path. As he is still in the early stages of his third year, he has several rotations to go and isn’t set on a particular specialty just yet. With that being said, he is currently leaning towards urology.

In Evan’s free time, he enjoys traveling to new places both inside and outside of Arizona and trying new foods and restaurants. He also enjoys rock climbing and tries to spend as much time outdoors with his friends and family as possible.