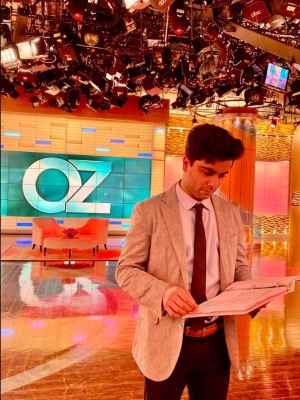 From reporting for the Daily Wildcat to researching medical issues for the Dr. Oz Show, Akshay Syal continues to take physiology beyond the bounds of classrooms and clinics. Akshay, a 2016 University of Arizona Physiology graduate and third-year student at New York Medical College, currently is taking a one-year leave of absence from medical school to work behind-the-scenes as a medical researcher for the Dr. Oz Show.

As a Physiology undergraduate student, Akshay’s favorite parts of the program were the classes. “As an undergrad, you’re offered an exclusive look into what it’s like in medical school,” he says. “Learning about anatomy and physiology at such an early stage was exciting and certainly made med school much less intimidating.”

Some of Akshay's favorite courses while he was at the University of Arizona was Exercise Physiology with Dr. Douglas Keen and General Chemistry with Dr. John Pollard. He enjoyed those courses because the professors challenged students to understand the material in context of the real world.

“They took simple principles and applied them to real world scenarios that allowed me to directly see the applicability of what I was learning — something that was often hard in college,” Akshay says.

Along with preparing Akshay for some of the content that will be presented in medical school, the rigor of the Physiology program also helped him to develop his work ethic. “I had to get used to working on material the night it was presented and that certainly helped me prepare for graduate school,” says Akshay.

Akshay says if he could change one thing about the Physiology program, it would be the inclusion of a medical Spanish course.

During his Physiology undergraduate years, Akshay was involved in a diverse array of extracurricular activities, including being a health reporter for the Daily Wildcat, the University of Arizona student-run newspaper. Branching out and exploring other passions outside of Physiology was what brought Akshay to the Daily Wildcat. As a result, he got to write breaking news and interview leading health experts, including the U.S. Surgeon General.  This experience, along with serving as president of the Music & Medicine Club, interning in the Department of Neurosurgery, and working as a Physiology Supplemental Instructor, ultimately led to his current work with the Dr. Oz Show.

After completing his time as a medical researcher, Akshay will be returning to medical school in June and pursuing a residency in Emergency Medicine.